Of castles and palaces 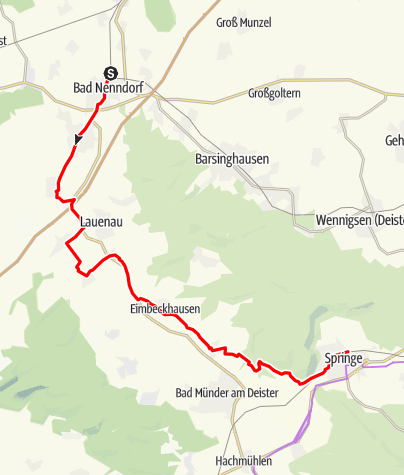 We start our cycle tour in Bad Nenndorf, at the railway station. This is a little outside, as the town's residents and guests were once not to be disturbed by the soot-emitting locomotives that used to run here. The spa is home to a bathhouse, a beautiful park and a small castle. Many visitors throw flowers into a water-filled crater, as they are preserved in the chalky spring.

The Rodenberger Allee leads us out of the village to Rodenberg. The village is home to the former Rodenberg moated castle, a local history museum and the St. Jacobi church. Passing between fields, we quickly reach Apelern, where there are two "Münchhausen water castles". As both are inhabited, we can only look at the facades.

Now we can either continue via Pohle and Meinsen to Hülsede or make a detour via Lauenau. If you go through the cycle tunnel to Lauenau, you will pass a Renaissance manor house. In Hülsede we finally encounter the fifth privately owned moated castle. Via Messenkamp and Eimbeckhausen we reach Nettelrede. Before we reach the village, we have to ride steeply uphill.

We now ride along the edge of the large Deitser forest area to Springe. The clockmaker Heinrich Göbel, who invented the light bulb in 1854, lived in the town. However, as he had no money to patent it, he did not share in the fame. Today, nothing remains of the former robber baron's castle. Worth seeing is, among other things, Peter's House, built in 1619 in half-timbered style, which we find on the market square in the pedestrian zone.

all notes on protected areas

By train to Bad Nenndorf

A2, exit 38 in the direction of Bad Nenndorf, continue on country roads

Parking facilities on the station premises

Book recommendations for this region:

Recommended maps for this region:

These suggestions were created automatically.

Would you like to the ask the author a question?

Help others by being the first to add a review.